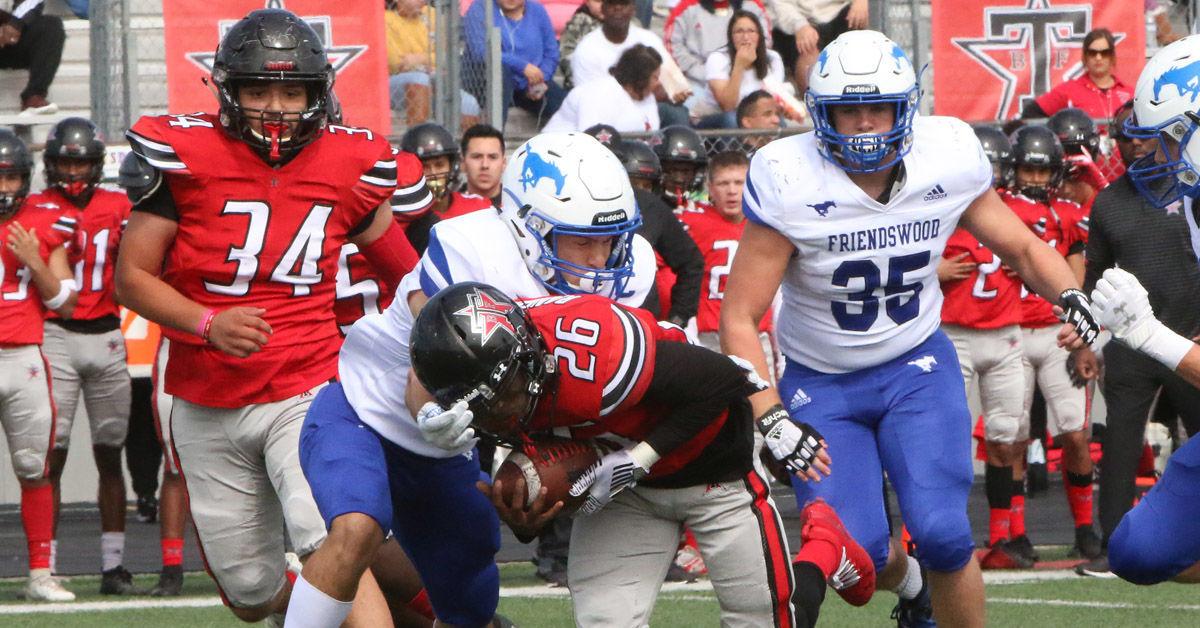 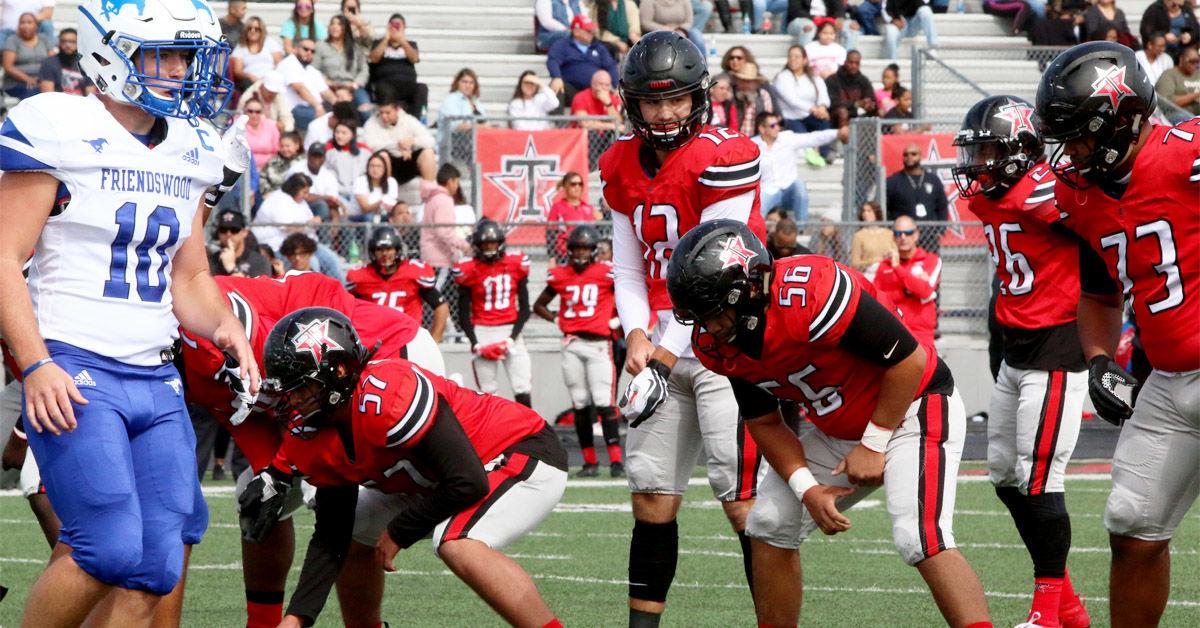 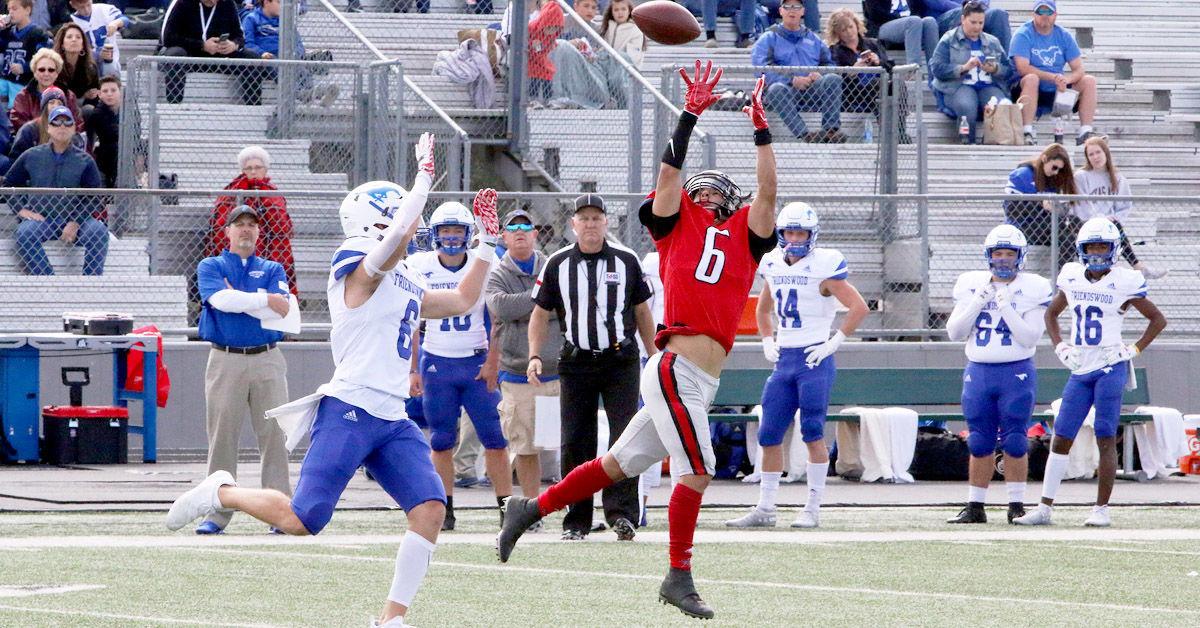 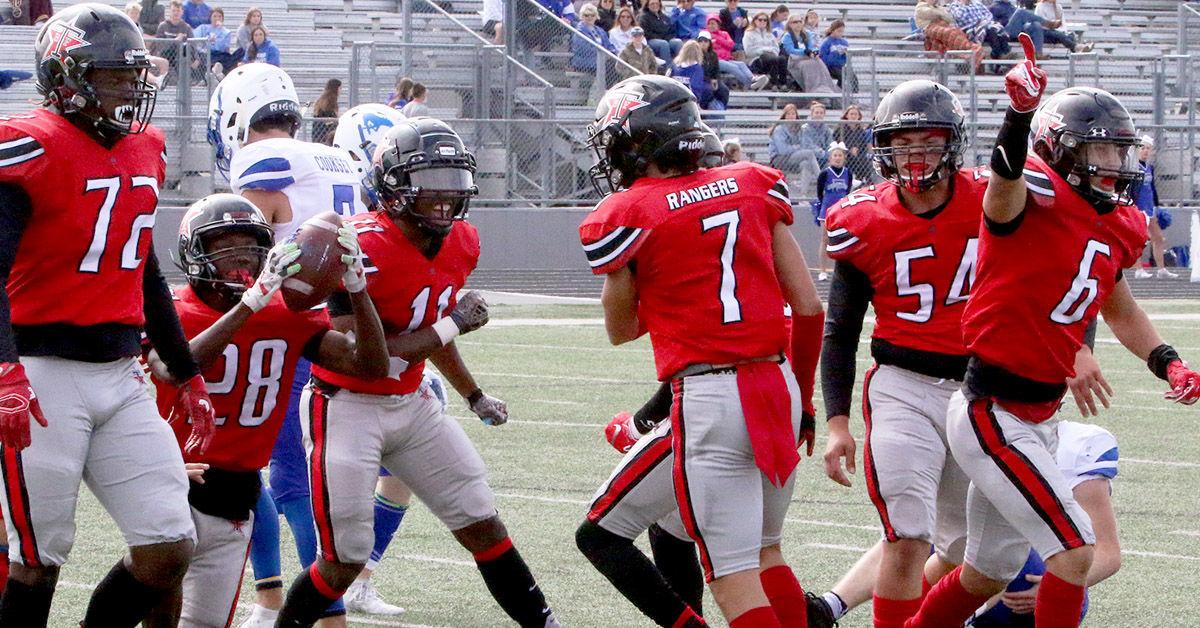 Terry defender Treivin Holloway holds up the ball after recovering a fumble Saturday against Friendswood.

Terry defender Treivin Holloway holds up the ball after recovering a fumble Saturday against Friendswood.

The Friendswood Mustangs entered Saturday’s contest at Guy K. Traylor Memorial Stadium in Rosenberg expecting to make short work of the hosting Terry Rangers and improve to 9-1 and secure the No. 2 playoff seed for District 10-5A DI.

In the end, the Mustangs got the results they wanted with a 45-21 victory, but the Rangers didn’t make the path clear in the first half.

Terry led 14-10 with under 20 seconds remaining in the second quarter before a devastating 14-point swing that changed the game.

“We had a few calls go against us,” Terry head coach Cornelius Anthony said. “But the guys continued to fight and that is all I can ask for.”

Junior Mustang quarterback Luke Grden dropped back for a pass and was swarmed by two Terry defenders.

The mass of bodies tangled together and the ball came out. Terry senior defensive lineman Milton Swain scooped up the ball and raced 80-plus yards for an apparent touchdown.

Back at the line of scrimmage, while the Rangers celebrated, one offical was calling an incomplete pass.

The referees conferred and called Grden for intentional grounding, giving the Mustangs the ball back with 12 seconds on the Terry 18-yard line.

Coach Robert Koopman rolled the dice and put the ball in his quarterback’s hands.

The junior signal-caller found senior receiver Christian Lee for a touchdown in the back of the end zone, Lee tapping his toe inbounds as he was falling out of bounds.

The Rangers had built a lead behind the game plan of running the ball and senior Quincy Johnson scoring a touchdown to start the second quarter and senior Brandon Kyles taking an option run 23 yards for a score with five minutes left in the first half.

After halftime, Terry was unable to match the same energy present in the first half.

The Rangers fumbled on their opening drive and Friendswood cashed in for a touchdown. Lee scored his second touchdown with a six-yard run with 8:26 remaining in the third quarter.

Senior running back Jared Veatch had a pair of touchdowns with a 4:30 left in the third and 1:55 left in the fourth.

Lee caught his second touchdown pass with seven minutes left in the fourth quarter, a nine-yard connection with Grden.

Terry’s Johnson added a two-yard touchdown for the Rangers’ only points in the second half.

Friendswood’s first-half points came from senior kicker Travis Mueller and senior running back Dane Roenne. Mueller hit a 23-yard field goal with 6:17 left in the first quarter and Ronne scored on a one-yard run with 7:23 left in the first half.

Friendswood outgained Terry 422-to-221 and the Mustangs had 27 first downs to the Rangers’ 14. Both teams had three lost fumbles.

Kyles was 5-for-8 for 82 yards while carrying the ball 17 times for 75 yards and one touchdown. Johnson had 11 carries for 52 yards and two touchdowns.

Friendswood (8-1, 5-1) will finish their regular-season slate with a home game against Angleton. Terry (2-7,1-5) will travel to Shadow Creek on Friday.