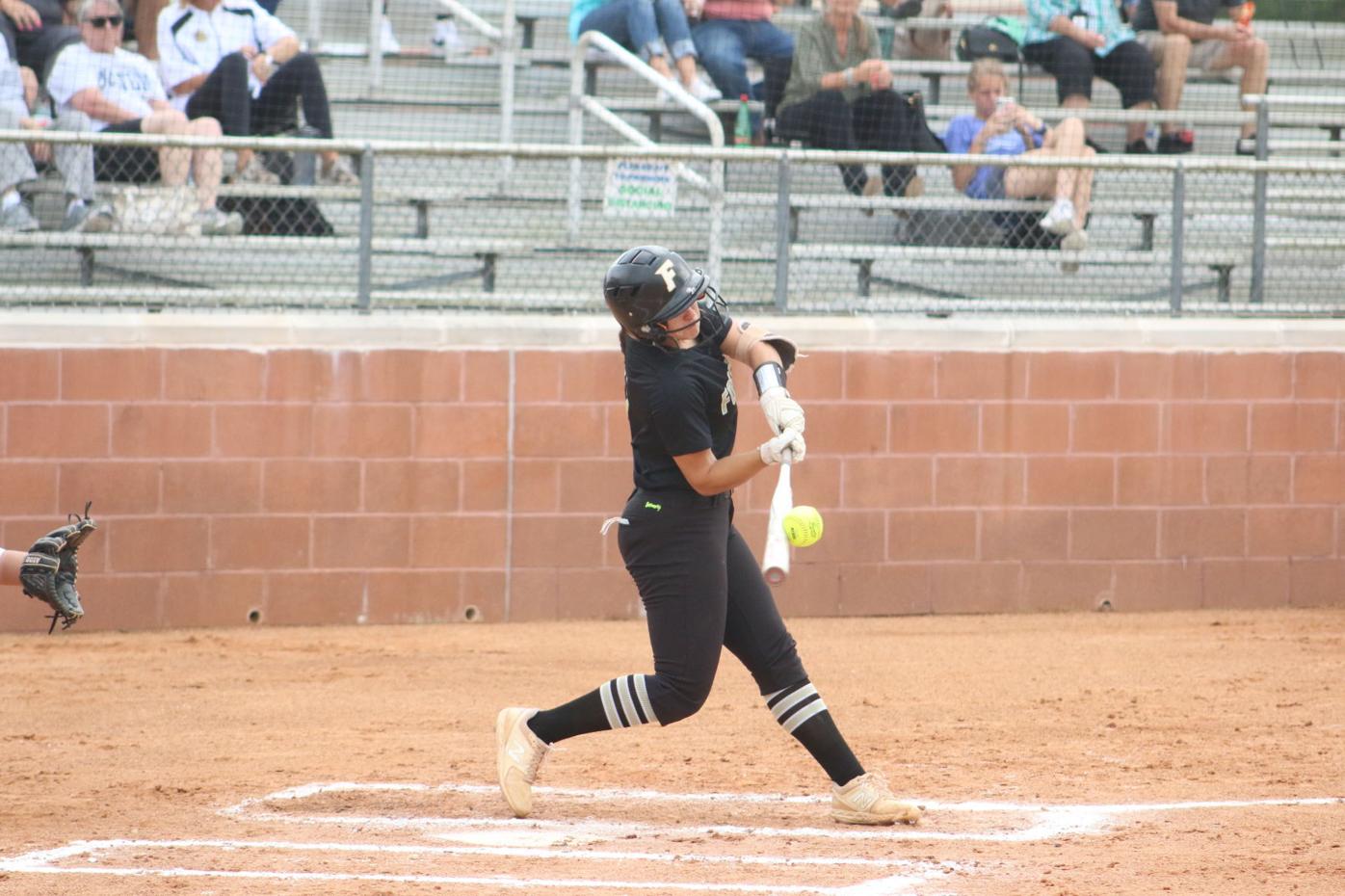 Foster freshman shortstop Ella McDowell swings and connects with the ball for her second home run in the 5A bi-district playoff game against Houston Austin on Wednesday. 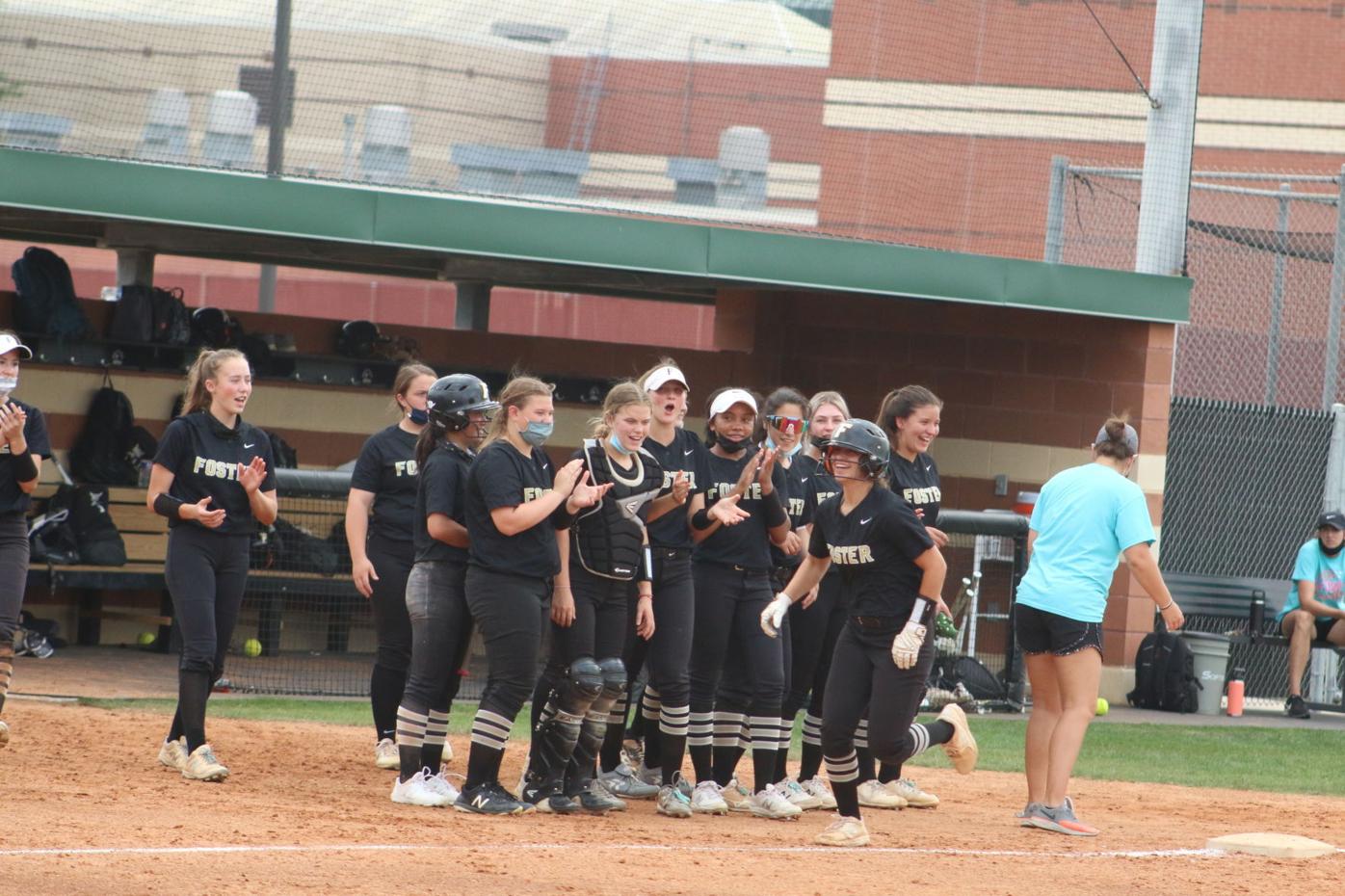 The Foster softball team congrats freshman shortstop Ella McDowell as she rounds the bases after her second home run in the game against Houston Austin in a 5A bi-district playoff game on Wednesday.

Foster freshman shortstop Ella McDowell swings and connects with the ball for her second home run in the 5A bi-district playoff game against Houston Austin on Wednesday.

The Foster softball team congrats freshman shortstop Ella McDowell as she rounds the bases after her second home run in the game against Houston Austin in a 5A bi-district playoff game on Wednesday.

The Lady Falcons looked in tip-top playoff form on Wednesday, as they hit six home runs and had two pitchers throw five perfect innings as Foster beat Houston Austin 19-0 in five innings to advance to the area round of the 5A playoffs.

Foster will face either Crosby or La Porte in the second round of the playoffs. The Cougars and Lady Bulldogs faced each other on Friday night at Baytown Sterling High School.

“The girls stayed really disciplined at the plate, no matter who we face,” Foster head coach Keely Shuler said. “They put the ball in play, whether it’s a home run or a line drive or on the ground, they come ready to play.”

Foster scored seven runs in the first inning off Austin pitcher Viviana Aviles as the Lady Falcons got six hits in the inning, including an RBI double by junior catcher Emily Naviar that scored Tosch for the first run. Then McDowell took a pitch to deep left-center field for a two-run blast, followed by a triple by sophomore Madison King, a RBI double by senior Rayne Alhaus and a RBI single by Welker made it 6-0. A sacrifice fly by Tosch that scored Welker ended the scoring in the first inning.

The second inning opened with a leadoff single by senior Kylie Stamper, followed by another deep shot over the left field wall by McDowell to make it 9-0. Two batters later, Welker hits a deep shot to center field for a two-run homer. Then two more batters later, Satcher gets her shot in the home run derby with her own long fly over the center field fence to make it 13-0 with just one out.

McDowell came up again and got a bases-clearing three-RBI double to center field to put Foster up 16-0 after two innings. “On or off the field, in or out of the dugout, (Ella’s) energy is contagious,” Shuler said.

More home runs for the Lady Falcons came in the third as Satcher hit a two-run shot to left, then Tosch followed with a solo homer to left.

Meanwhile, junior Kendall Mendez and senior Amanda Allen combined to throw five perfect innings, but both pitchers struck out all 16 batters they faced. Mendez pitched the first three innings and struck out nine, while Allen got six strikeouts in her two innings of work.

Foster moves to 26-3 on the season and is on a 12-game winning streak.