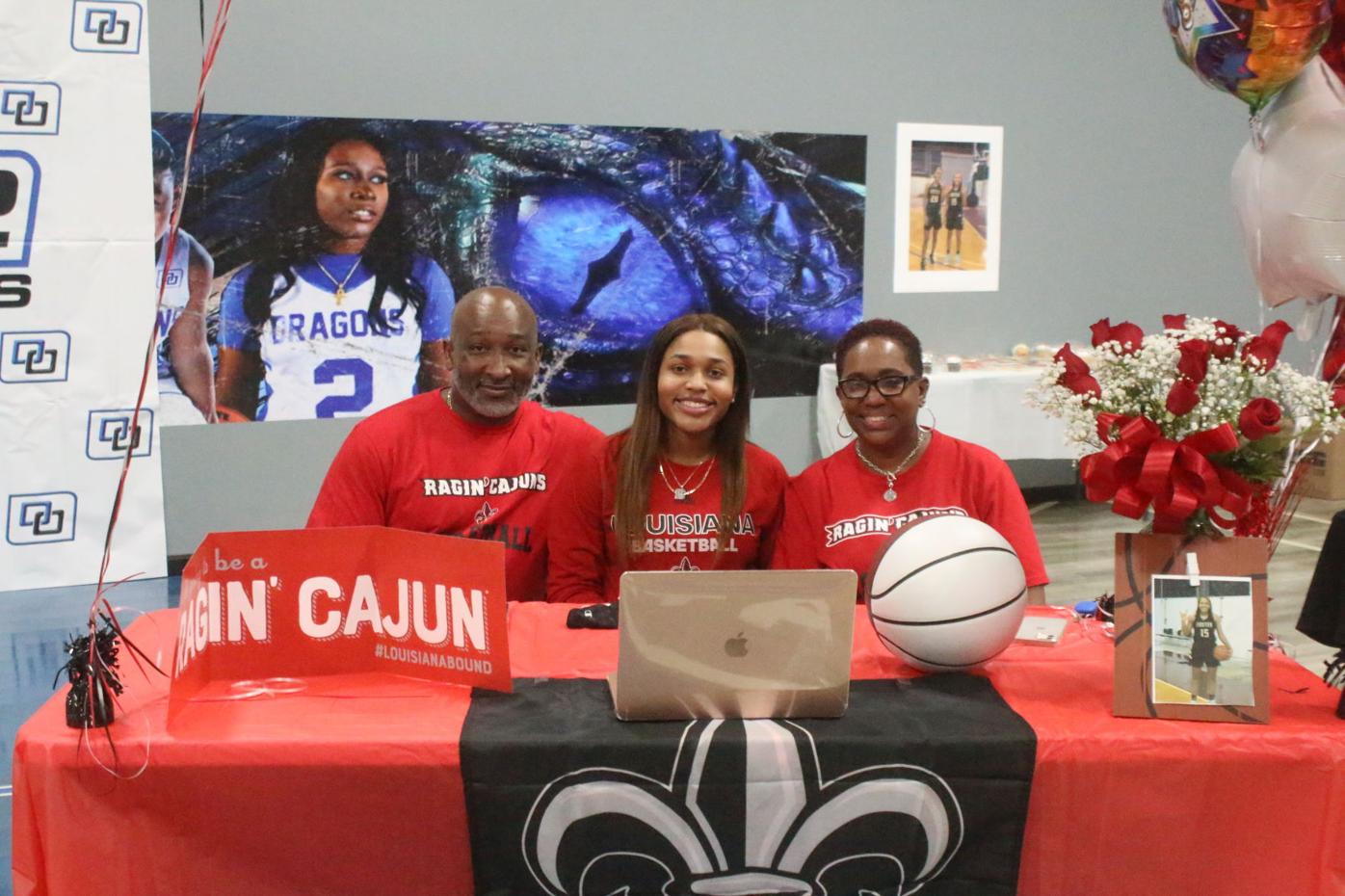 Foster girls basketball forward Alicia Blanton signed to play at the University of Louisiana at Lafayette last week. Pictured with her is father Robert Blanton and mother Shannell Blanton. 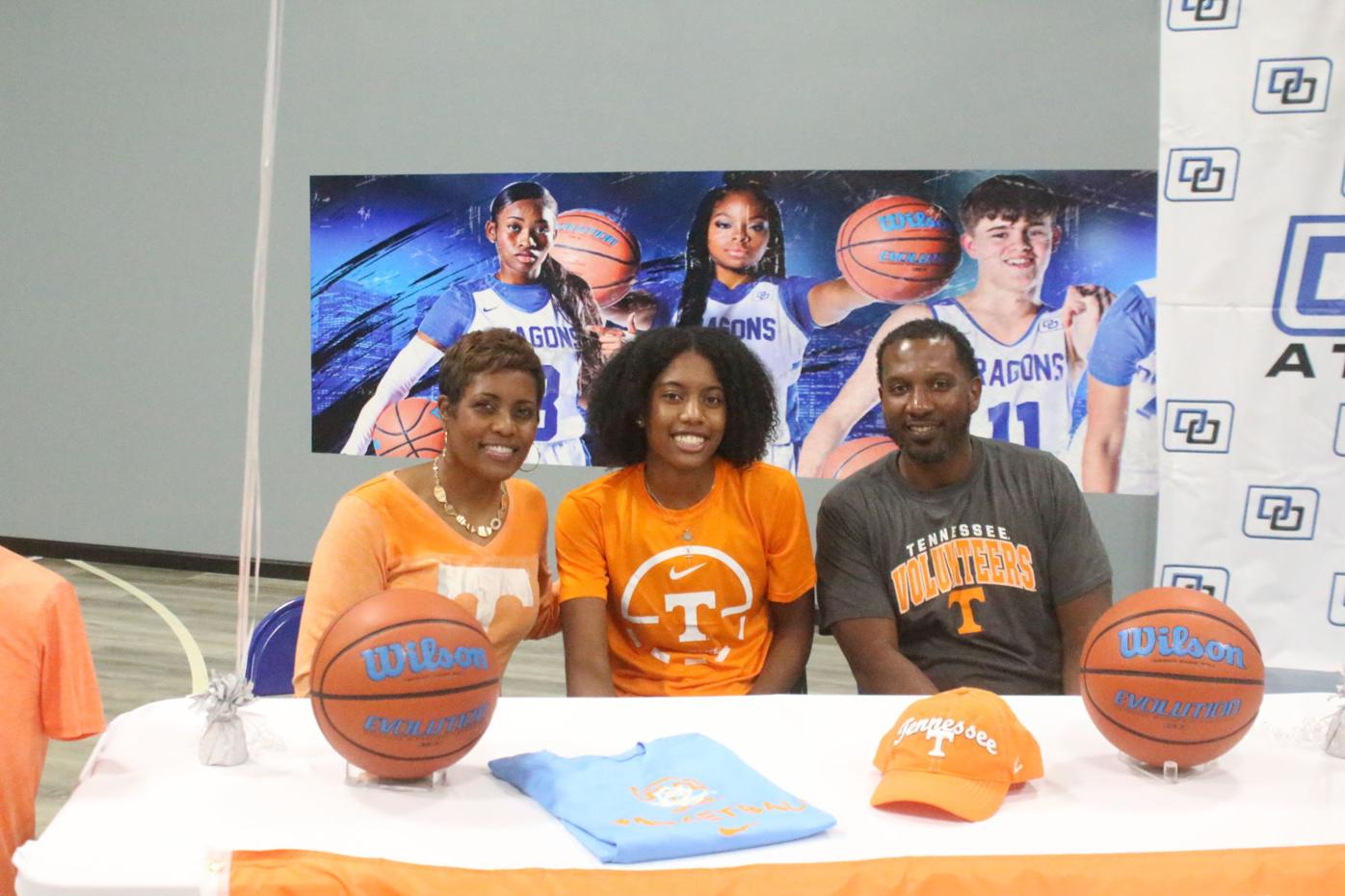 Foster girls basketball forward Alicia Blanton signed to play at the University of Louisiana at Lafayette last week. Pictured with her is father Robert Blanton and mother Shannell Blanton.

SUGAR LAND – Foster girl’s basketball coach Savitria Williams-Smith was having mixed feelings on Wednesday night. She saw two of her players find out where they are going next season, but also optimistic on what they have planned on the court this season.

Smith was overjoyed like any coach would be as she saw two of her players, guard Kaiya Wynn and forward Alicia Blanton, both signed letters of intent to play at Tennessee and Louisiana-Lafayette, respectively.

The duo had their signing ceremony off-campus due to COVID-19 restrictions.

Wynn, a top-50 player in the nation, grew up in Tennessee and moved to the area in the summer, already committed to play for the Lady Vols. Blanton worked hard in her three years at Foster and was able to land an offer from the Ragin’ Cajuns.

“It’s bittersweet, but I wake up every day excited about basketball, and the possibilities that we have,” Smith said. “It’s exciting to see these young ladies move to the next step in life. As you know, it gets bigger and better in every step.”

Wynn played the last three seasons at Ensworth School in Nashville, where she averaged 15.3 points per game, 6.1 rebounds and 2.3 steals as she led Ensworth to a pair of Tennessee state titles. She verbally committed to Tennessee in October of 2019.

But when her mother took a new job in Texas, Wynn moved from Nashville to Richmond and enrolled at Foster. Coach Smith said she was a “gift blowing in the wind.”

In the first two games with her new team, the 6-foot guard scored 25 and 29 points as Foster beat Dickinson and Travis in dominating fashion.

Wynn gave a look at other strong programs like Louisville and N.C. State, but the allure of the Lady Vols’ history and tradition was tough to resist.

“This has been a day I’ve been looking forward to ever since I committed,” Wynn said. “It’s just another step in being a Lady Volunteer basketball player.”

Wynn’s future coach is excited to see her in Knoxville next season. “Kaiya Wynn grew up in Tennessee, so she understands just how important the Lady Vol program is,” Tennessee head coach Kellie Harper said. “After watching her play and practice, and visiting with her, we knew she was a priority for our class.

“Kaiya is an athletic wing who can score behind the arc or drive to the basket, as well as rebound and defend. She is competitive and aggressive on both ends of the court. Kaiya is a winner with high character, and I am thrilled she is joining our program.”

But before Wynn can think of heading back to Rocky Top, she wants to help her new teammates at Foster to get a taste of being on a championship team.

“We know it’s going to be a long road, but the pieces that we have and the things that we’re able to do, I can for sure say that we’re going to be in the state championship,” she said.

Meanwhile, Blanton was happy to sign with Louisiana, especially after suffering a knee injury that kept her out for most of her junior season. But Cajun head coach Garry Brodhead didn’t waver on bringing Blanton to Lafayette.

“When I had my injury, (Louisiana) continued to recruit me and said that they still wanted me,” Blanton said. “That really hit home for me.”

But the main reason for Blanton’s decision is the family atmosphere that Brodhead has created with the Louisiana program. “It felt like home,” she said.

At 5-foot-11, Blanton was recruited as a guard even though she is more of a forward for the Lady Falcons. Despite her injury, she averaged 11.4 points, 7.2 rebounds and 1.7 assists last season, which were a bit lower that the 14.1 points 10.8 boards and 3.3 steals she averaged as a sophomore.

“She’s a workhorse,” Smith said. “And she’s coachable, she wants to be coached. That’s her biggest strength.”

Both Wynn and Blanton are happy to get their recruiting adventures done so that they can focus on the upcoming season, which now has some big goals set for the Lady Falcons.

“We’re in go mode,” Blanton said. “Coach said that we can be a really good team, and I believe that. We’re trying to make it to state this year, and I feel adding Kaiya will make us actually reach (state).”

Foster is 2-0 on the young season before Saturday’s game against Cypress Ranch. The Lady Falcons’ next game is Tuesday at Brookshire Royal.

The Queen's Gambit: How a Netflix show is increasing the popularity of chess