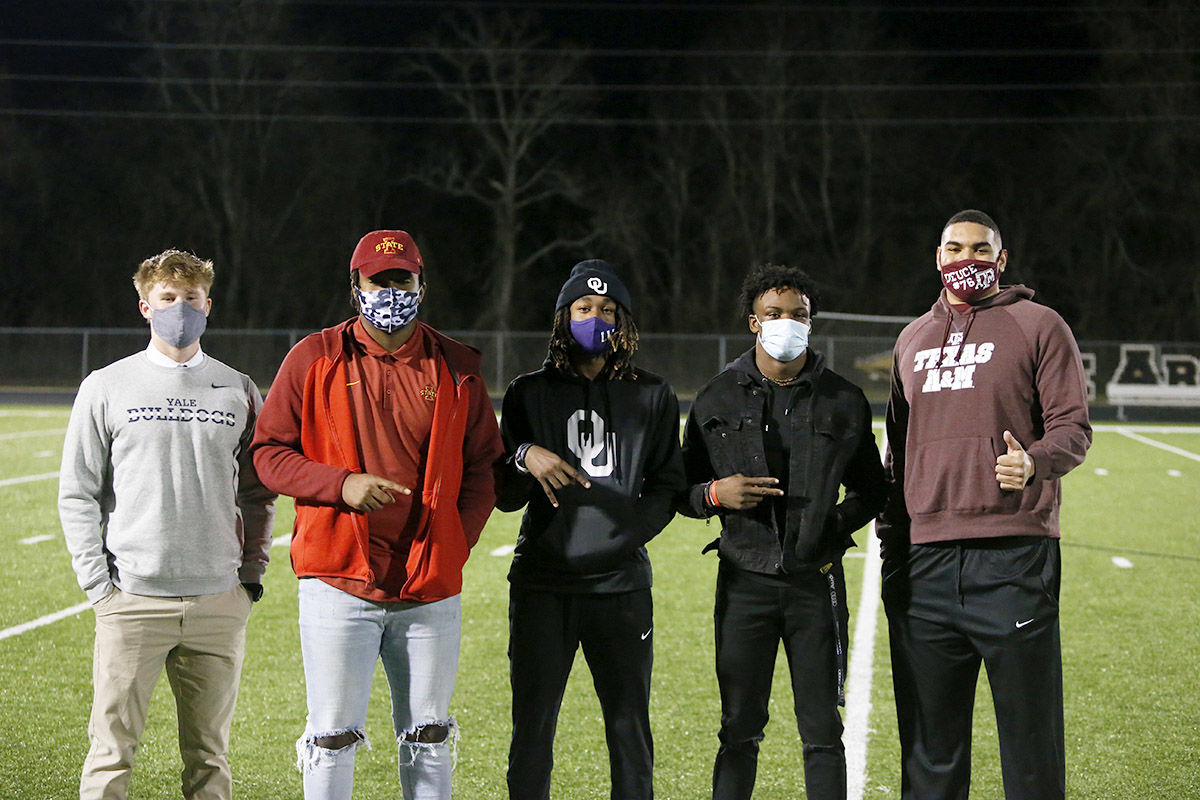 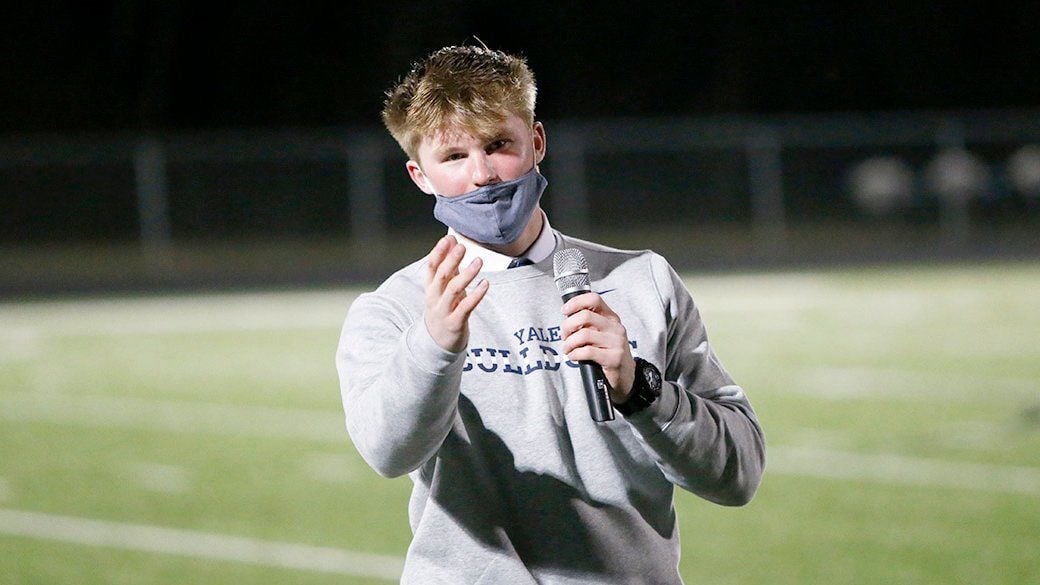 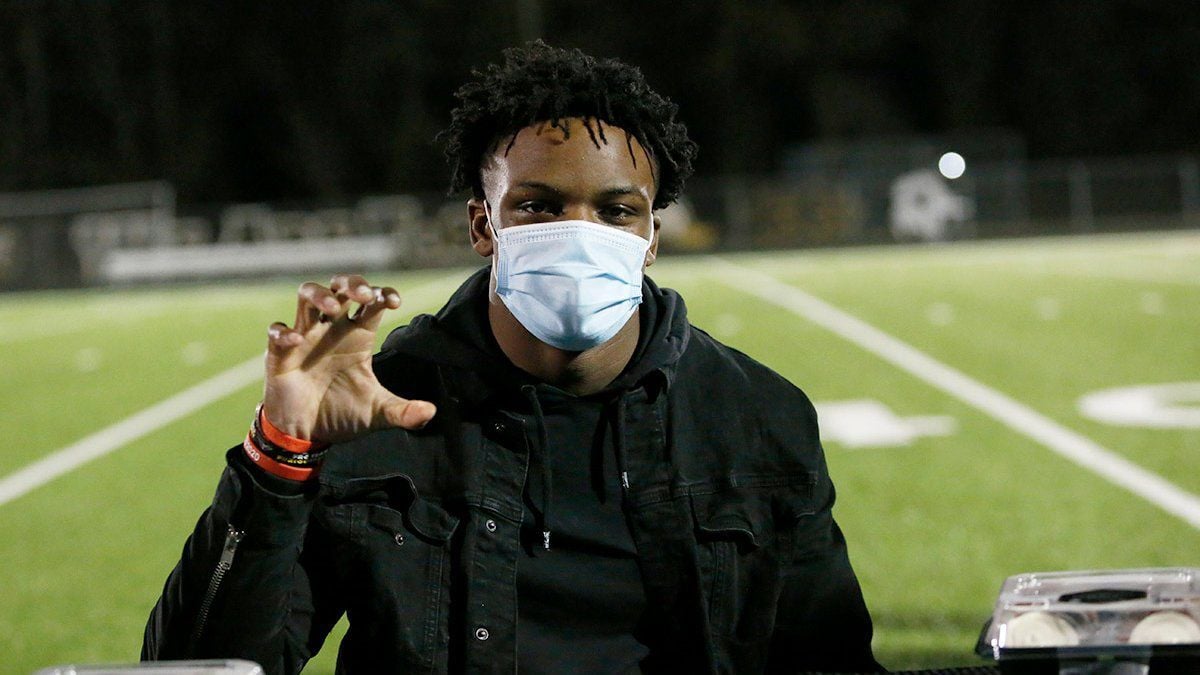 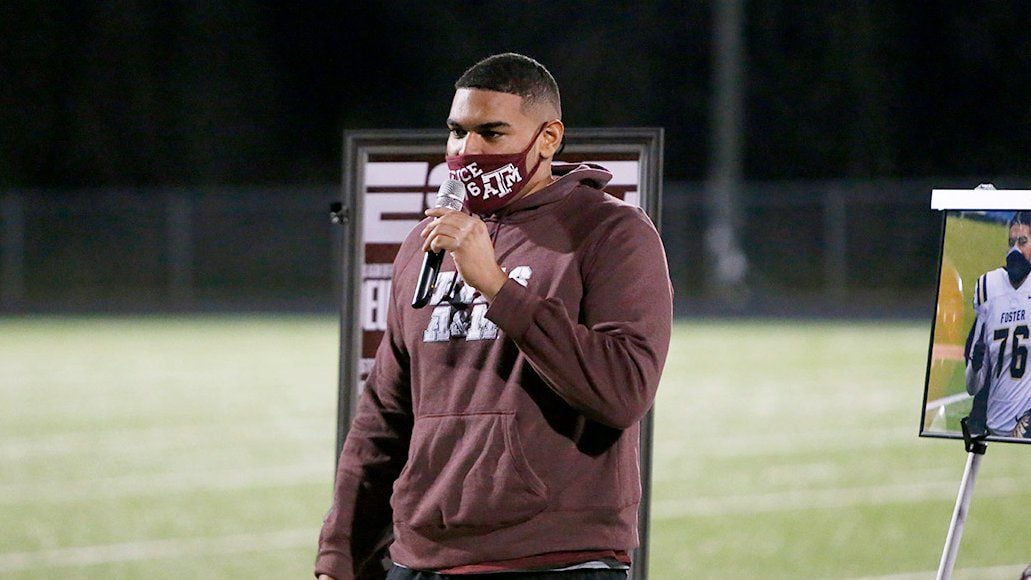 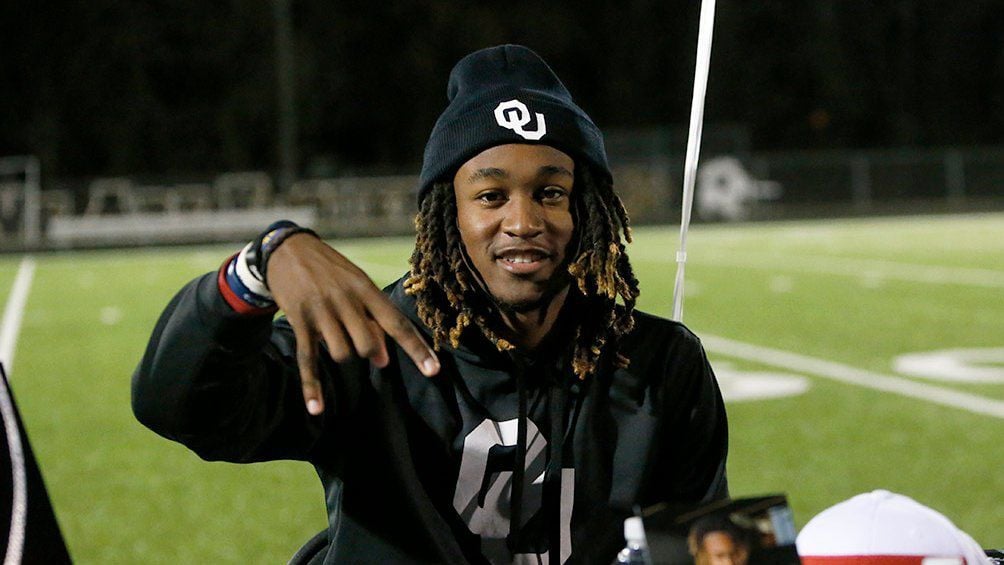 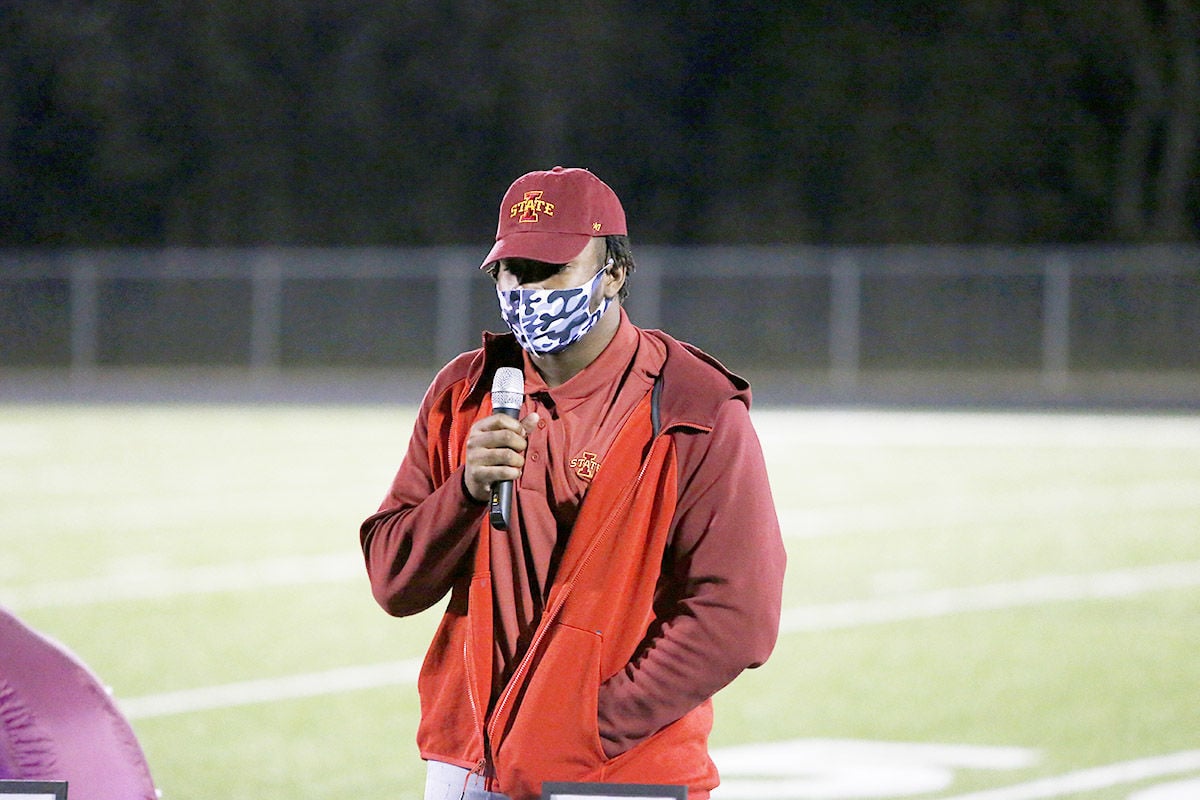 A National Signing Day event isn’t a given for every high school football program, but it has been an annual event for Foster.

Falcon head coach Shaun McDowell has regularly sent multiple players each year to Division I football, and 2020 is one of the largest groups yet.

“I’m truly blessed to be around such great people first and athletes second,” McDowell said.

In a year of a pandemic, a large signing class meant the Falcons moved their annual event outside to The Nest, Foster’s on-campus stadium.

The Nest was home to the Falcons’ practices and sub-varsity games; it would be the stage for the next step in the football careers for offensive lineman Reuben Fatheree II, wide receiver Cody Jackson, defensive lineman Tyler Onyedim, linebacker Udoka Ezeani and quarterback Austin Tutas.

Reuben Fatheree II towered over his classmates from the moment he stepped on campus at Foster. The multi-sport athlete was an instant contributor for the Falcons as a four-year starter on football and basketball teams.

Fatheree has been a target of collegiate programs from across the country, but the four-star offensive tackle is staying close to home at Texas A&M University.

“This is a very special moment,” Fatheree said. “If you had seen me when I was young, you wouldn’t have expected I was going to play sports because I was really bad.

“But this moment, it means a lot. My scholarship is paid for, and I’m going to a great family.

“I hope to have four great years at A&M.”

Fatheree has been a first-team all-district selection for the past three years after helping the Falcons win nearly 40 games over the past four years. National Signing Day is one of the final moments for Fatheree to have with his teammates together.

“We’re a huge family. We’ll do anything for each other. We have each other’s backs.

“It’s a great final moment, but at the same time, it is a sad moment. It will be one of the last times we’ll be together. We’ll all always be Foster Falcons.”

Jackson headed across the Red River

Foster High School is no stranger to talented wide receivers among the Falcons’ ranks. Nor is it a new occurrence for a Falcon wide receiver to join the Oklahoma Sooners.

The decision was easy for Cody Jackson to follow the same path as CeeDee Lamb and sign with Oklahoma on National Signing Day.

“It has been a very easy process,” Jackson said. “That was due to (Oklahoma head coach Lincoln Riley and wide receiver coach Dennis Simmons).”

Jackson finished his high school career with just under 3,400 yards receiving and over 40 touchdowns. He has earned multiple all-district, all-area and all-state honors in his three varsity seasons with Foster.

Tyler Onyedim is hard to miss on the Falcons’ defense. The 6-foot-3, nearly 300-pound defensive lineman is becoming a force to be reckoned with in every football game he plays.

Onyedim will be taking his massive size and talent to Iowa State University in 2021.

“This is a blessing; I can’t thank God enough. I can’t wait to get down to Iowa State.

“While we were (out of school for COVID-19), I started getting my offers, and it was amazing for me.”

“It’s a great fit for me, and I’m really excited.”

Onyedim is a three-star recruit and ranked as the 74th-best DT nationally by 247Sports; he tallied 63 tackles and 21.0 TFL as a senior. Onyedim has been an all-district contributor for the Falcons, and he will be joining a Cyclones squad that is peaking in 2020. Iowa State will play in the Fiesta Bowl against Oregon on Jan. 2.

Udoka Ezeani has put in the work to get where he is on National Signing Day. The Foster linebacker had an impressive offseason, including a trip to a Rivals Camp.

The work paid off with Ezeani signing with Missouri State University.

“It’s been a long process,” Ezeani said. “It took a long time, but it went by fast at the same time.

“I didn’t have any offers as a junior. Over the summer, I worked with a bunch of trainers. My senior year, I balled out the first few games and I got my first scholarship. It took off from there.”

“This is a blessing. It’s truly a great feeling.”

Ezeani helped the Falcons finish with the No. 3 defense in District 10-5A Division I behind only Katy Paetow and Kempner.

A moment to remember

One name was familiar to Falcons fans that have only seen Foster on Friday nights. Austin Tutas hasn’t suited up for the Falcons during the 2020 season, but the quarterback is headed to Yale University next season.

Tutas was a transfer from Archbishop Spalding in Severn, Md., this offseason, but the UIL didn’t grant a waiver for the quarterback to play for the Falcons in his senior season.

“It was tough not to be able to play,” Tutas said. “I came down here to be out on the football field on Friday nights. I wanted to play Texas high school football, but at the end of the day, sometimes life is better than X’s and O’s. Sometimes it’s bigger than a football game.”

Tutas took the UIL decision in stride, and he had a moment to shine with his new family at Foster on National Signing Day.

“Rarely do things in life ever go to plan; that is something that I have learned through this process,” Tutas said. “That being said, I wouldn’t change it for the world.”

“You could offer me a full season of football, and I wouldn’t trade that for the relationships I’ve built and the coaching I’ve got down here.

“The coaching was second to none, coach (Brad) Stanfield I would say is one of, if not the best, quarterback coaches in the country. Coach (McDowell) has an unbelievable staff and an unbelievable program.

“Honestly, I have made some of the best friends that I’ve ever made in my life and relationships that I’ll probably have for the rest of my life.”