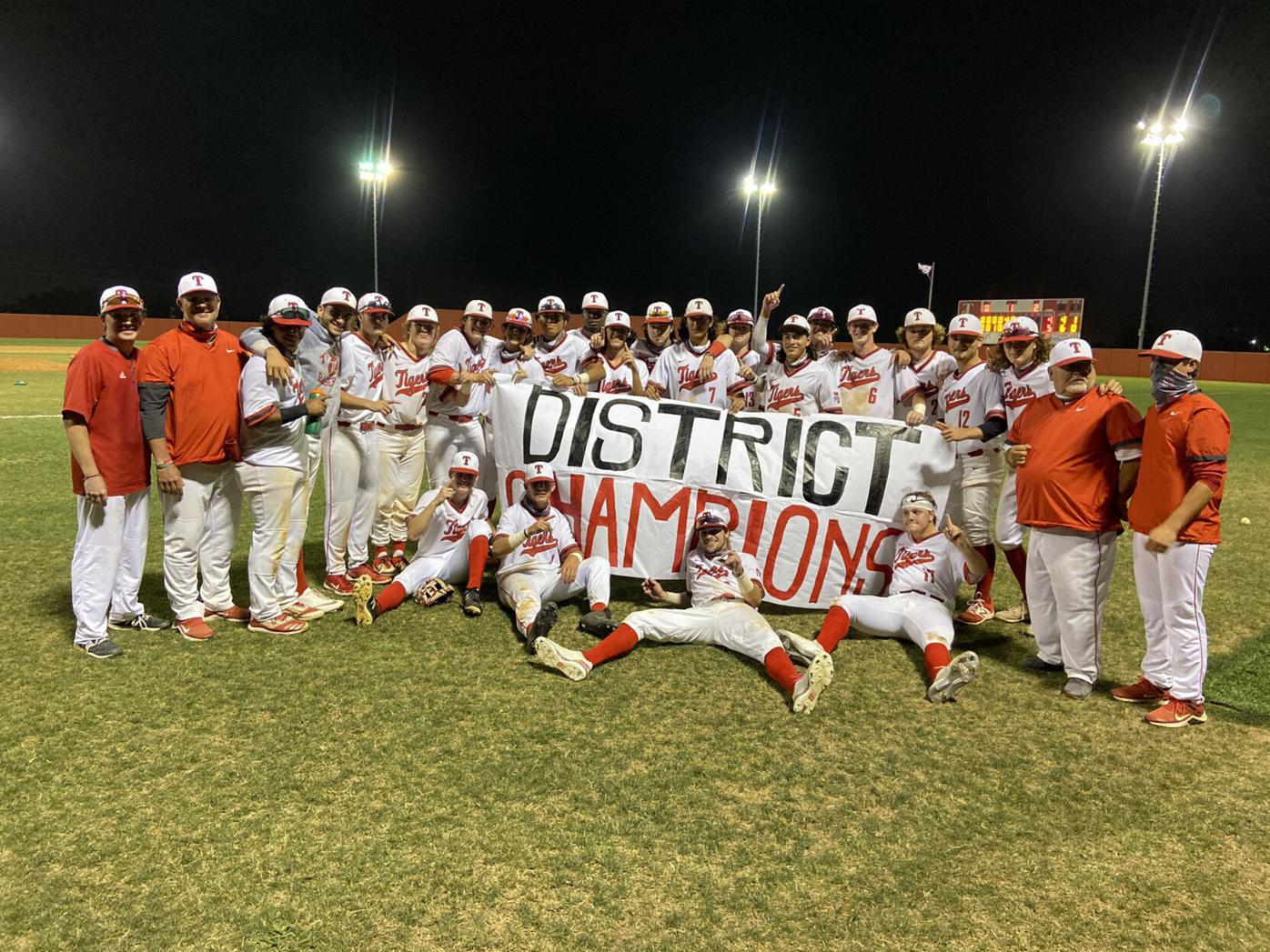 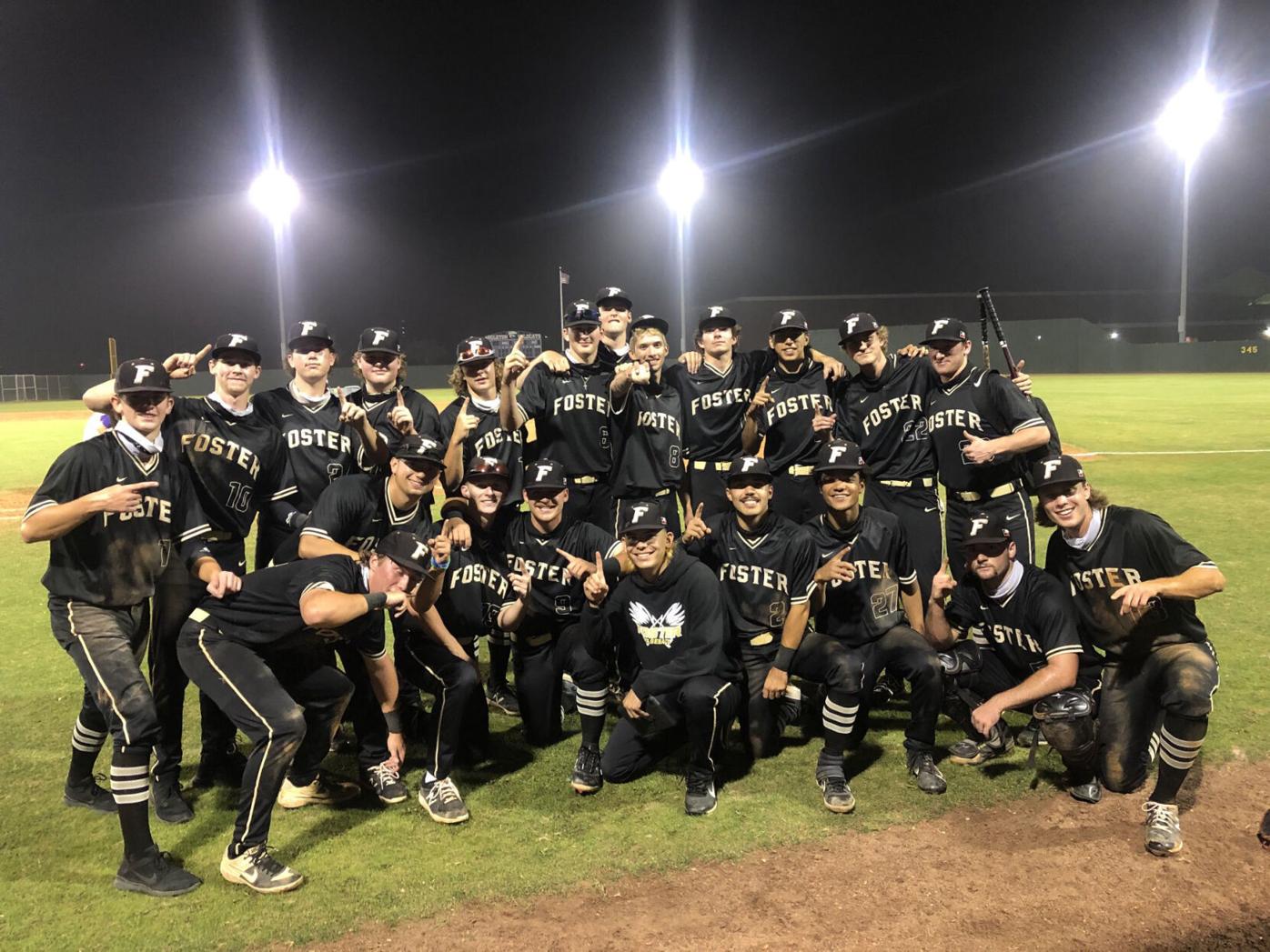 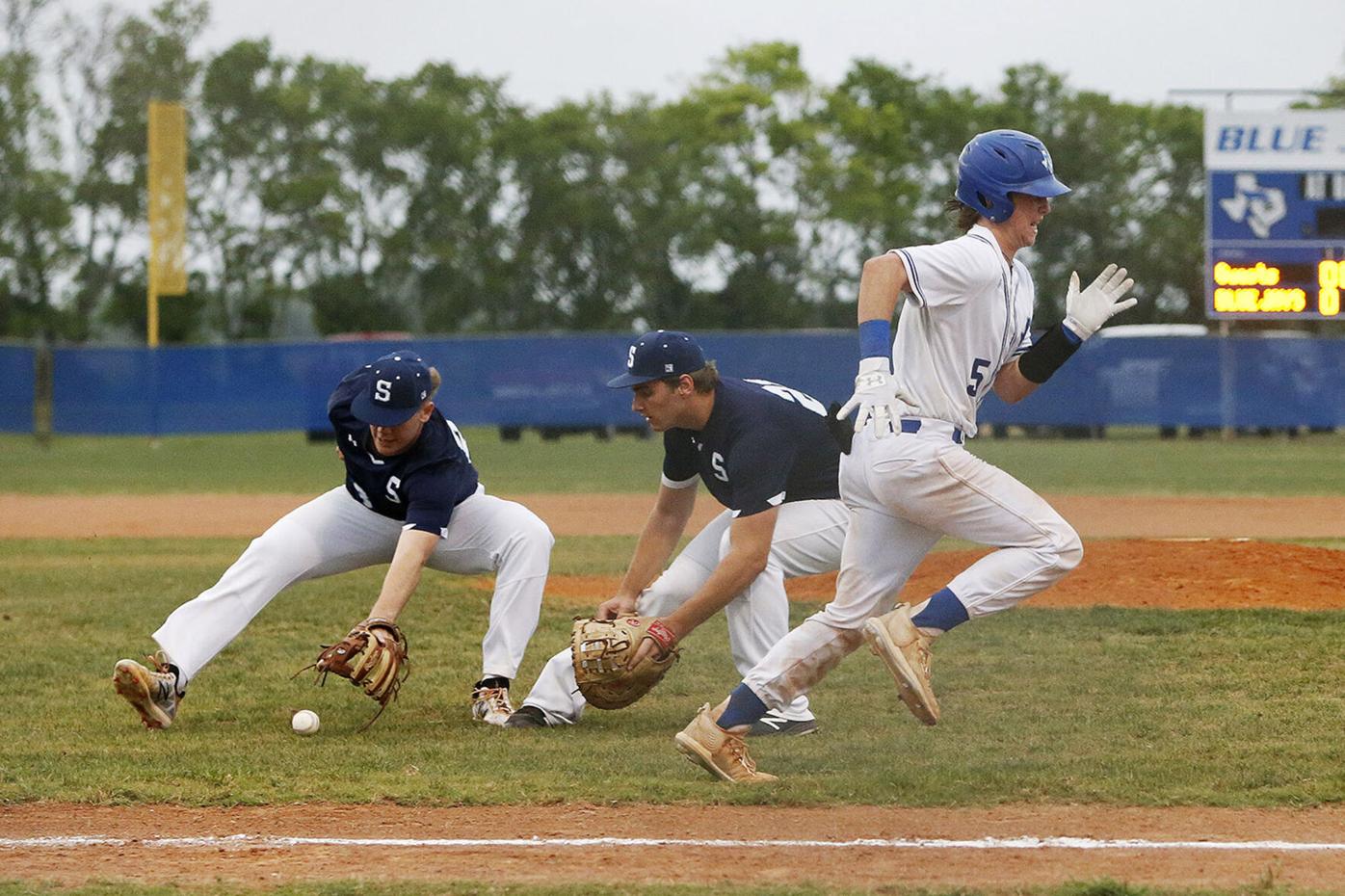 Needville’s Coy Pierce attempts to outrun a pair of Sweeny defenders after dropping down a bunt Tuesday at Blue Jay Field in Needville.

Needville’s Coy Pierce attempts to outrun a pair of Sweeny defenders after dropping down a bunt Tuesday at Blue Jay Field in Needville.

The Tigers locked up the District 20-6A title on Tuesday with a win at home against Elkins, scoring two runs after the Knights posted a four-run inning in the fifth.

Lathan Buzard was 3-for-4 with a run scored and an RBI. Nick Massarini hit a triple and drove in a run.

The Tigers held on for a road win at Dulles Monday despite the Vikings scoring four runs over the final two innings.

Je-Isaac Alamo and Lathan Buzard each collected two hits for Travis. Alamo and Alejandro Marquez each drove in two runs. Parker Witte allowed four runs on six hits over 3 1/3 innings, while striking out five and walking one in the start for Travis. Micah Dean (2.0 IP) and Dylan Kinney (0.2 IP) didn’t allow a run in relief.

Hunter Mullings was 3-for-4 with two runs scored and two RBIs for Dulles. Parker Airhart drove in three runs. Both Vikings hit a home run. Brandon Epps allowed one earned run on four hits over two innings in relief.

Bulldogs’ starting pitcher Bryson Williams allowed two earned runs on nine hits over seven innings in a win for Austin. Ryan Dugas was 2-for-3 with a double and two runs batted in.

Parker Airhart was 3-for-4 at the plate for Dulles. Hunter Mullings hit a triple and scored a run. Canon King allowed one earned run on six hits over 3 2/3 innings in a starting effort for the Vikings.

Collin Dague, Travis Vasek and Josh Werner combined to pitch a perfect game against the Broncos while striking out 11 and walking none.

The Falcons scored seven runs over the final two innings to lock up the District 24-5A title Friday at Angleton. Hayden Holchak, Luke Capel and Ryan Talley combined to collect eight hits. Lee Kubosh hit a home run while Capel, Sam Hardcastle and Holchak each hit a double. Capel and Hardcastle drove in three runs each.

The Falcons helped Terry remain tied with Angleton for the final playoff spot in District 24-5A with a win over Angleton Tuesday at Falcon Field.

The Rangers kept their playoff hopes alive with a win at home against Fulshear on Saturday after a rainout on Friday.

Terry scored four runs in the first inning and it was enough for Alex Coronado and Dionico Perez on the mound. The pair combined to allow three earned runs on seven hits over seven innings, striking out eight and walking five.

Michael Cuevas was the offensive power for Terry, driving in four runs on two hits.

Noah Shipp drove in two runs for Fulshear. Thomas Barnhart was 2-for-4 with a run scored and a double. Grant Davis kept the game close for the Chargers with 3 1/3 scoreless innings in relief, scattering five hits while striking out one and walking two.

The Chargers rebounded from a loss last week to Terry with a win against the Rangers on Tuesday to secure a playoff spot.

Ty Barnhart and Thomas Barnhart each hit a double. Thomas scored three times in the lead-off spot and pitched a complete game while allowing one unearned run on four hits. He also struck out 14 and walked one.

Jonathan Anders (2.0 IP) and Zyong Johnson (5.0 IP) combined to no-hit Marshall on Tuesday. The pair stranded four base runners that reached by walks while striking out 14.

The Mustangs used a 10-run second inning to pull away from Marshall on Saturday. Kennon Houston, Luis Ruales and Logan Wheeler each collected three hits for Lamar. Houston Drove in four runs and hit a triple.

The Cougars completed the sweep of Willowridge on Tuesday with another shutout victory that included 12 runs in the third inning. Brendan Phegley, Manny Marcucuui, Luke Milholland-Geach and Peter Garcia each collected two hits. Phegley and Ross Reichardt each hit a double.

The Cougars scored eight runs in the first inning to pull out a victory over Willowridge on the road Monday.

Brendan Phegley was 3-for-3 with a double, two runs scored and two RBIs in the lead-off spot, while teammate Anthony Marino was 2-for-4 with a home run, three runs scored and four RBIs.

NEEDVILLE — The Blue Jays scored a run in five of the seven innings of Tuesday’s District 25-4A contest at Blue Jay Field in Needville, but Sweeny made the most of their scoring chances to grab firm control of the district title with a 7-5 victory.

“We didn’t do a good job of situational hitting,” Needville head coach Chris McKeller said. “When you have runners on base, we have to get a ground ball to push the run across. They did that, plain and simple.

“At the same time, when you leave hitters in hitter’s counts, they are going to have free swings. We need to do a better job of getting ahead of commanding the pitching and getting ahead earlier.”

The Bulldogs’ starting pitcher Garrett Nail bent but didn’t break, allowing two earned runs on 10 hits over six innings. The Blue Jays put pressure on Nail and the Sweeny defense with aggressive base running and successful bunting. But in the end, the Blue Jays left five runners on base that could have been the difference-maker.

Jon Loewe and Nathan Elster combined to allow one earned run on two hits over two relief innings for the Blue Jays.

Reese Fredrickson was 3-for-3 at the plate including a double, while Bryce Meuth was 2-for-4.

The Blue Jays set up a winner-take-all game against Sweeny on Tuesday with a shout-out win over La Marque on Friday. Needville’s Bo Spitdowski threw five perfect innings on the mound while striking out 13 without allowing a hit or walk.

The Brahmas lost a road game on Friday to drop to 6-6 in District 24-3A play, in a tie for fourth place with Hitchcock.

Dallas Novicke was 2-for-4 in the lead-off spot for East Bernard, driving in one run. Luke Minks and Weston Swoboda each stole two bases.

The Cougars lost their last game of the 2021 season on Friday against Van Vleck. Dillon Arteaga went 2-for-3 with two runs scored and a double for Brazos.

How do elite athletes conquer their nerves?