Starting at
$1.00 for 1 day
Get Started
View all rates
You have permission to edit this article.
Edit
Home
News
Sports
Fort Bend Living
Education
Opinion
Publications
e-Edition
Archives
Pay My Bill
1 of 3 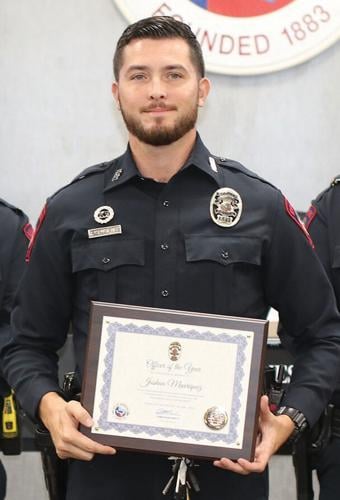 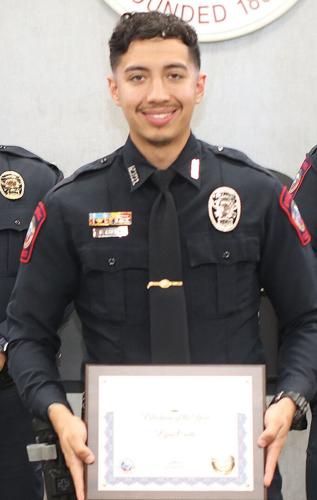 Ryan Cantu was named Patrolman of the Year. 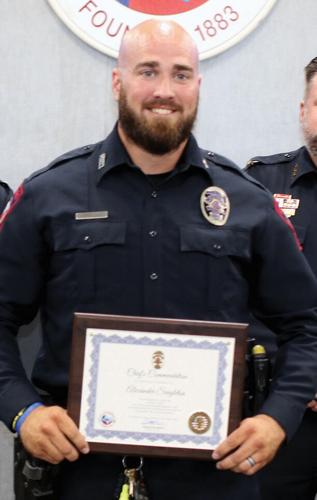 An alert Rosenberg police officer who spotted four thieves running from a beauty supply store last year was commended on Tuesday for arresting the individuals on the spot and recovering thousands of dollars of stolen loot. Officer Josh Manriquez was one of six officers to receive plaques of appreciation from the Rosenberg Police Department, the city of Rosenberg and its grateful citizens.

Det. David Reed was named Detective of the Year. On the night of Nov. 19, 2021, Det. Reed investigated an aggravated assault that had occurred in the 900 block of Avenue E. Preliminary information revealed that a man was shot while standing outside his residence. No description of the shooter was available and Reed had little or no suspect information to go on. However, Det. Reed immediately began an extensive investigation, which yielded suspect information that identified a Mission Bend individual as the suspected shooter. The suspect also is believed to have committed other unsolved crimes in Fort Bend County. “There is no doubt Det. Reed’s investigation prevented future crimes from occurring, not only in Rosenberg but also in our neighboring (communities),” said Mayor Kevin Raines. “We’re very proud of Det. Reed. (His efforts are) very commendable.”

Canine officer Josh Manriquez was named Officer of the Year. Officer Manriquez knew the Ulta Beauty Store in Brazos Town Center was often a target of thieves. So he began doing frequent checks on the business. On one Sunday evening while checking in on the business, he witnessed several individuals running from the business with large amounts of merchandise in their hands. The merchandise had been stolen. Manriquez detained the four thieves and found thousands of dollars worth of stolen merchandise from stores in other communities in their vehicle as well as an illegal firearm. “Officer Manriquez’s investigation cleared unsolved thefts in Rosenberg and many other (communities),” Raines said. “Officer Manriquez’s diligence in keeping our retail area safe is commendable and appreciated. I mean, he took four (thieves off the street), that’s commendable unto itself. We appreciate you so much for what you did.”

2021 Telecommunications Operator of the Year

Shelby Radford was named Dispatcher of the Year. In 2021, Radford realized the computer software used by officers and dispatchers did not include adequate mile markers and entrance and exit ramp locations, which could cause a delay in emergency Radford imported the missing information into the computer software. “By doing this, first responders are able to get precise location information, which in turn reduces police response time to emergencies occurring on U.S. 59,” Raines explained. “Thank you, TCO Radford. That’s a very, very important thing.”

Ryan Cantu was named Patrolman of the Year. “Officer Cantu has represented the city well during his time as patrol officer by committing himself to crime reduction,” Raines said. Officer Cantu took upon himself the task of organizing and maintaining files on known gangs in Rosenberg. Due to his efforts, Officer Cantu has helped solve several violent crime cases by properly identifying suspects. “Further, Officer Cantu was instrumental in identifying one of the suspects responsible for the murder of a Harris County Precinct 4 deputy in October 2021,” Raines said. “Officer Cantu worked closely with the Houston Police Department to identify one of the suspects who resided in the Rosenberg extraterritorial jurisdiction. Thank you, Officer Cantu, we appreciate all your hard work.”

Officer Tim Krause and Officer Katrina Surratt earned the police department’s annual Community Service Award. Krause was selected of his longtime efforts to guide the police department’s explorer post. The program includes young people 14-20 who are interested in pursuing a career in law enforcement. Officer Krause donates his time to lead the post members through weekly instruction and competitive events against other police explorers posts and community service projects. Officer Surratt was selected for her efforts to improve community relations and community engagement. She has helped make the department’s annual National Night Out, Thanksgiving Food Drive, Christmas Toy Drive and monthly Movie Night with the Police Department a huge success, Raines said. She was also instrumental in the preparation for a “strenuous audit” of the police department by state auditors, “which ultimately assisted the Rosenberg Police Department with maintaining its ‘Best Practices Accreditation Status.’ So, thank you both very much for your service,” Raines said. “We truly appreciate it.”